Support my Kickstarter Support me on Ko-Fi

Another Indie-Game? But of course!

Discover a humouristic point and click adventure inspired by all the masterpieces which made us stick to our computers back in the day (and wherefore we played outside way too infrequently). Full of loony characters, unexpected twists and challenging riddles.

Accompany Vio on her unintentional journey through various realms. Explore broken cities, pirate ships in the deepest jungle and other unreal places. Stand by her side when she makes the acquaintance of the (depressive) Death and engage with lots of explicit and ambiguous references, hommages and immitations of the big classics past (and not quite past) times.

We are a bit vintage - therefore we draw our background art the old-fashioned way with paper, pencil and ink. Colorizing is done digitally - this way we leave less colorful smudges on our desks. 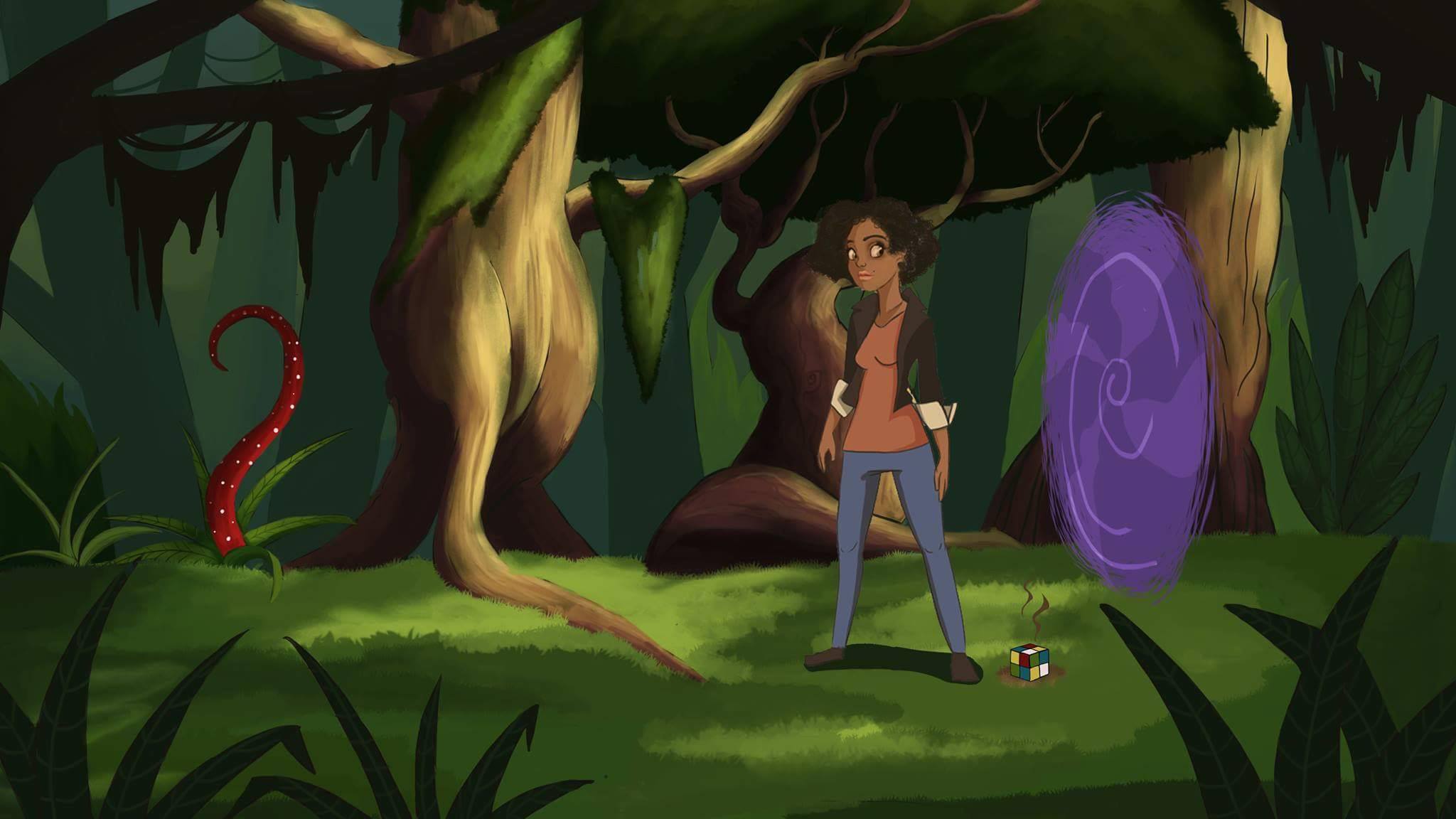 I’m Eva, a true frankfurt woman and the solo dev of this point & click adventure game. As the sole developer, I create A Twisted Tale from the first idea to the last line of Lua script. This means that also the story, dialogues and puzzles come from my pen, as the graphics and animations are created by me. I use paper and pencil for this, and I draw in ink. The graphics are digitised using a scanner and finally coloured on the PC. For the animations, I use the classic frame-by-frame method, and thus do without common animation software.
In the next step, the game is technically realised by me via Engine Visionaire Studios. Since the planned contents and their mechanics often exhaust and exceed the possibilities of the engine, I also use Lua script to realise them.

As a child, I already had my own computer at an early age. Back then I played everything I could get my hands on, but I lost my heart to point & click adventures. I was hopelessly in love with George Stobbart's voice (Broken Sword) and loved finding bizarre solutions to even more bizarre puzzles in Monkey Island (3). My favourite point & click adventures also include Toonstruck, Orion Burger, King's Quest (7) and Indiana Jones and the fate of Atlantis.

Since turning professional in 2012, Su Ling has voiced in 500+ commercials, 100+ corporate videos, a couple of animation series, video games, live-action dubs, and 1-2 audiobooks.

You may know her as Ying from Boboiboy, Mayday from No Straight Roads, and Ms Dira from Rimba Racer. She’s also the first (and only) Malaysian actress in an American anime dub where she voiced Akiya’s mom in Kageki Shoujo.

Hi, my name is Kimi (Meidowski) and I am an aspiring voice actress from Germany! I am currently working my way up to finally be allowed to stand in studios and am therefore all the more happy that I get the chance to lend my voice to Vio in "A Twisted Tale"!

I can also be heard in the German Jackbox patch by JobJob as M. Bubbles or in the Deltarune radio plays by Louis Proll as Noelle.

Thank you to all who support and share this Kickstarter!

Andrew James Spooner is a puppeteer, actor and voiceover artist with over 25 years experience. As a puppeteer he performed on Muppet Treasure Island, Jim Henson’s Animal Show, The Hoobs, 101 Dalmatians, That Puppet Game Show, Muppets Most Wanted, The Furchester Hotel and The Dark Crystal Age Of Resistance. He also worked on Spitting Image in the mid 90s.

Andrew has appeared as an actor on a number of British TV shows including The Bill, The Knock, Inspector Morse, Lee and Dean and the recent reworking of the childrens classic Worzel Gummidge.

As a Voice Actor Andrew has appeared in a number of Audiodramas including Alien: Sea Of Sorrows, Unseen Academicals, The Sandman and The Christmas Pig for Audible, Doctor Who: Water Worlds, Doctor Who: Colony Of Fear, Unit:Nemesis and Master! for Big Finish, Passport To Oblivion and Getting Better for Spiteful Puppet, and Venna's Planet for B7 Media.

He also narrates audiobooks for The Black Library and Games Workshop set in the Warhammer universe.

Tom Vogt is best known as the dubbing voice of Laurence Fishburne (Morpheus in Matrix) and Colin Firth (Bridget Jones, The King's Speech).

He is also often heard in documentaries and magazine programmes on TV (e.g. ttt on ARD), in commercials and occasionally voices audio books. Since 2020, Tom has been coaching actors and narrators in dubbing, commentary speaking, narrating audio books.

Oliver Smith is a Northern Irish voice-over artist with one year of professional experience and over a decade of amateur and behind-the-scenes acting experience.

Since making his debut into the indie voice-over and voice acting scene last year, he has voiced Cleo's Dad in 'Cleo: A Pirate's Tale', which reached #1 on the Steam Hidden Gems game list. He has also voiced the role of Jarin Korliss in the audio drama 'Corellion' and will voice Atmosphere in the upcoming animation 'Atlas and the Stars'.

Kai Seuthe is primarily a narrator for audio books, explainer videos, commercials and even more. But he also occasionally lends his voice to other characters as a voice actor. If you would like to hear more from him or would like to book him for your own projects, the best way is to contact him via his homepage www.kaiseuthe.de.

Melissa Thom is a voice actor with over 30 years' experience. She has voiced for Rockstar Games & GTAV, Elder Scrolls, DOTA 2 & Disney, as well as numerous corporate and commercial clients.

She lived & worked as a VO in California, USA, for 2 years and is now based back in the UK as a full time voice actor. She is also the founder of BRAVA - a VO training academy that specialises in training people in the art & business of voiceover.

Karin Buchali is known to many adventure fans as the german voice of the Voodoo Lady from Curse of Monkey Island or Pearl from Broken Sword 1 + 2.

Many big radio plays, some nice TV roles, big and small - Karin Buchali does dubbing, radio, advertising, training films and since a few years works as a very sought-after voice teacher. Every task is important to her and should be skilfully realised. This also includes her solo evenings. She has also enjoyed performing in comedies, musicals and cabaret for many years. 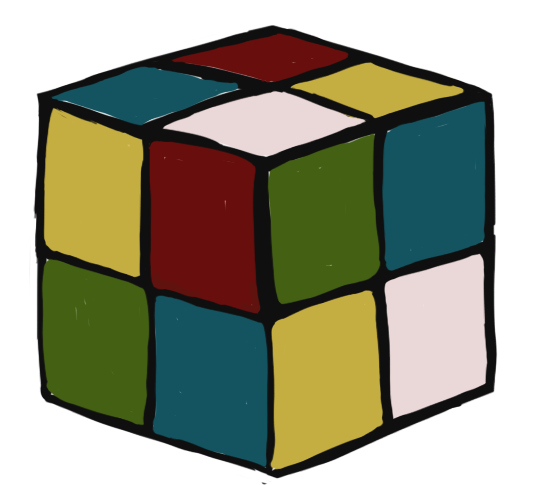 And what the heck is up with this wannabe rubicks cube?

I only send you a mail when I have more important updates.
For the day-to-day stuff, follow me on twitter, here: